Despite the nation’s relatively brief time to create a musical legacy, South Korea has constructed a pop-music industry that stands today as one of the largest in the world. Its focus on constantly expanding and evolving plays a crucial role in the small country’s growing overall impact. And while key moments like “Gangnam Style” and the history-making success of BTS have been perhaps the most visible elements of the international Korean-pop crossover, there’s a larger history there.

K-pop music has shown that South Korea’s entertainment industries can create a vehicle to push traditional musical boundaries while also affecting and influencing culture around the world. Take a trip through the genre’s history with 10 key tracks that represent K-pop’s sonic and artistic growth, and demonstrate how the definition of “Korean pop” continues to expand.

Ground zero for K-pop. Seo Taiji & Boys’ debut single marked a watershed moment for Korean music with its mashing of genres, embracing then-popular sounds of the West like hip-hop and New Jack Swing and combining them with danceable, pop-styled choruses to create a phenomenon. Despite existing for only four years, the trio changed popular music in South Korea with songs immersed in everything from metal to dance, and lyrics that spoke to the frustrations of the country’s teenagers. The group was censored by the media and faced backlash from older listeners — all of which only cemented their place in music history.

It wouldn’t take long for Seo Taiji’s style to become a potential business opportunity, with companies looking to develop the chart-topping formula for mass consumption. Boy bands like H.O.T. and Sechs Kies delivered transformative pop cuts made all the more enticing by the members’ good looks and choreographed dance moves. H.O.T. found success with their Seo Taiji-esque, socially conscious debut single, “Descent of Warriors,” which discusses bullying, but it was their lighter follow-up track “Candy” that made them sensations.

When Korea suffered a financial crisis in the late ’90s, the development of new pop music also suffered as the initial generation of breakout acts disbanded or retired. As the country was reforming in the mid-’00s, soloists like Rain and BoA not only thrived as chart-toppers at home but also made some of K-pop’s first significant moves overseas. BoA became one of Korea and Japan’s top divas and the first K-pop star to send an album to the U.S. Billboard 200 charts, while Rain’s powerful R&B-pop styles led to success around Asia and some of the biggest — and earliest — K-pop concerts in America.

The comeback of K-pop groups occurred in large part thanks to TVXQ! Known as an “idol” group who trained under a record label in singing, dancing, rapping, acting, public speaking and more, TVXQ! and their contemporaries were formed to represent the “ideal” bands that could satisfy all kinds of fans with their range of talents. By the 2008 release of Mirotic and its title-track lead single, TVXQ! had not only proven their popularity but were becoming increasingly more involved in the music with songwriting and solo tracks. “Mirotic” broke records both in Korea and with its subsequent Japanese release.

As competition heated up in the idol scene, groups needed to work harder to prove they belonged. Wonder Girls became next-generation K-pop sensations for their retro-themed concepts that included everything from the viral, Motown-inspired “Nobody” (the first K-pop song to crack the Billboard Hot 100 singles chart in America) to “I Feel You” (their 2015 comeback single that saw them transform into an ’80s synth band). Sexy or cute, beastly or bizarre, sporty or punky: Groups would soon create musical and public identities based on these concepts that came to life in their music, videos, stage performances, fashion and more.

While BIGBANG were sensations in Korea, the outfit became an early international breakout for the YouTube generation. “Fantastic Baby” was not only an earworm of a dance track that fit alongside the West’s then-current hitmakers, like will.i.am and LMFAO, it also stood out for its fashion-forward, at-times-bizarre visuals. No surprise: For years “Fantastic Baby” held the record for most-viewed music video by a K-pop group.

While it became a worldwide sensation as a novelty song, PSY’s “Gangnam Style” represented far more than its signature horsey dance. For the first time, people were listening to and enjoying a Korean-language song on a global scale. Age 34 at the time, PSY was sort of a misnomer in the K-pop scene as a soloist with comedic hip-hop videos. But the energetic, dance-ready, genre-fusing sounds in “Gangnam Style” were undeniable K-pop, and helped a new audience open their minds to the world of Korean music.

As “Gangnam Style” was becoming a global breakthrough for K-pop, the scene was growing more experimental and competitive at home. At the start of their sixth year together, the reigning female troupe Girls’ Generation released “I Got a Boy,” a track often compared to Queen’s “Bohemian Rhapsody” for its colorful meld of sounds, deliveries and tempos.

In addition to K-pop artists becoming competitive players on YouTube and social media, the music itself was growing in exciting and unexpected ways. The “nation’s girl group,” Girls’ Generation mastered a creatively chaotic mix of cheerleader chants, cute-rap hits, Aguilera-like diva breakdowns and Diplo-lite beat drops all swirled together with the nine girls’ bubble-gummy melodies.

As idol groups continued their reign, BTS built upon the success of their predecessors while also bringing back a crucial element from K-pop’s earliest days: conscientious messages. The septet’s music — a forward-looking blend of hip-hop, electronic and pop sounds — combined with lyrics touching on politics, mental health, school hardships and other issues facing youth. In 2017, BTS got a co-sign from and performed alongside Seo Taiji — by then a musical legend in Korea — before releasing “DNA,” their first single to enter the Billboard Hot 100. The song speaks to a connection that goes deeper than what we can see on the surface — a metaphor that can be used for love as well as for the fate that brought BTS together to make history.

Today, the definition of K-pop has expanded beyond the confines of what could be termed “Korean pop music.” Reflecting a now-commonplace trait of K-pop groups, SuperM is a multinational act made up of members from Korea, Canada, Thailand and China. What’s more, SuperM brought together seven different K-pop stars in an Avengers-like formation — a never-before-attempted joint project between the Korea-based super-label SM Entertainment and Capitol Records in America.

SuperM is Taemin of SHINee (the veteran boy band with more than a decade of experience), Baekhyun and Kai from EXO (the Korean-Chinese boy band who broke early Billboard chart records), Taeyong and Mark of NCT (two rappers in the experimental boy band with an “unlimited” membership), and Ten and Lucas of WayV (a Chinese boy band that represents SM Entertainment’s first venture in the country). The result was a No. 1 debut album, led by the stadium-sized anthem “Jopping” that was performed on the Ellen DeGeneres Show and in a sold-out Madison Square Garden concert. The creation, and success, of a group like SuperM shows how K-pop’s potential knows no bounds.

Discover  / BTS  / Girls' Generation  / K-Pop  / SuperM
Jeff Benjamin is TIDAL’s K-pop editor. He is an award-winning music journalist who has acted as Billboard’s K-pop columnist since 2013 and covered the Korean-pop music industry for more than a decade as a reporter, editor, curator and host. His work has appeared in the New York Times, Rolling Stone, GQ, Forbes, NPR and more, and he’s been featured as a K-pop expert in the Washington Post, CNN, USA Today, TIME, MTV and other outlets. 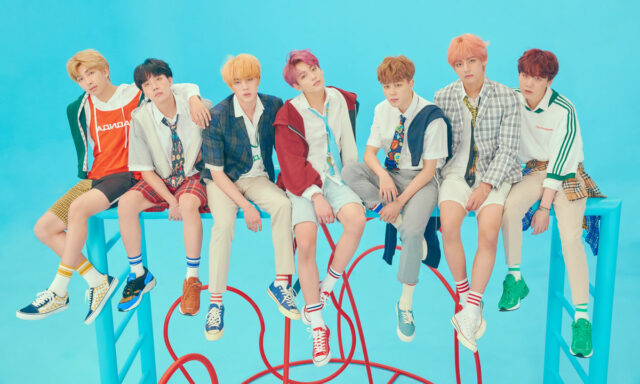 BTS Has Taken Over the World