Make Yourself, Incubus’ breakthrough album which features “Drive,” turns 20 this month. The group’s holistic approach to art was evident right from that single’s video, in which front person Brandon Boyd literally draws himself in an animation he created with José Pasillas, the band’s drummer. Over the last two decades, Boyd has dedicated his off-stage time to growing as a visual artist—a practice for him which preceded music making—balancing arena shows with dozens of international gallery exhibitions. He’s a prolific painter and illustrator, working across an array of mediums: inked portraits emphasizing his detailed linework, spilled paint splashes evoking batik and psychedelia, vibrant abstractions of Uzumaki swirls as large as 36 square feet. Like his songs, Boyd’s art alludes to fantasy, eroticism, and the dismissal of ego.

I suspect Incubus’ formative influence is part of why I felt assured in pursuing and balancing multiple creative professional disciplines; though I’m not a formal visual artist, I’ve painted all of my band Speedy Ortiz’s album covers, and published my first book of poetry last November. Backstage in Philadelphia before a performance on the 20 Years of Make Yourself and Beyond tour, Brandon talked to me about how he made himself as an artist, and offered advice to those looking to do the same. 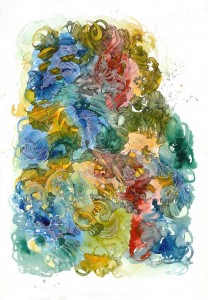 The brushstrokes in your large-scale pieces seem to have a meditative quality. Do you enter that head space when painting?

I appreciate that observation for many reasons, not the least of which is because it’s not intentional. But I do drop into a quasi-meditative state when I paint, especially when I’m doing the kind of pointless, large, abstract things. I get lost in them. I feel like I’m not an important part of the equation, I’m just a moving arm.

Do you feel like they’re pointless? I think it’s great you’re working on such a large scale.

I do. And that’s precisely the reason [I do them]. One of the reasons I meditate is to have something that is aimless and pointless, with no goal in mind. Everything in our culture is so goal-oriented, so end-result. You have to have some activity in your life where there is no point. When I’m doing these large-scale, abstract pieces, I—the “I” I know myself to be—goes away temporarily, sometimes for many hours at a time. And then I come back into my body and there’s [a painting.] Sometimes it’s beautiful. Sometimes I roll it up and set it on fire. [laughing] But sometimes it’s beautiful and I feel called to share it.

So you’re able to tap into a kind of fugue state while working.

Yeah. And sometimes the paintings do have more directionality to them. I love doing more figurative work and watercolor and using abstract elements to them. I love painting some of my friends, people that I’ve had interesting or intimate relationships with over the years. It’s fun to try and capture them in a moment. And those are a little bit more pointed, like, “I’m going to paint a picture of you right now.” So there’s more technique involved. 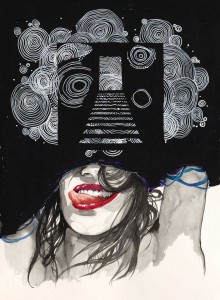 Your lyrics are often narrative. And in your work that draws from illustration and portraiture, I get a sense of story. Some of your sketches even feel like you’re pulling from comics.

Sometimes, yeah. A big influence for me, especially when I was a kid, was a lot of that San Francisco early counter-culture poster art—Stanley Mouse and Rick Griffin. And with them I accidentally discovered Aubrey Beardsley, who became a big favorite of mine. Through Beardsley I discovered Egon Schiele and a lot of that kind of work. All of that is still informing me even if I’m not aware of it.

We have in common that our moms are painters. Was it difficult for you to establish your own style, growing up in a family with so many people practicing art?

Is your mom psyched about the fact that visual arts become more of a focus for you over the last decade?

I think so, yeah. But my mom was also a performing artist when she was much younger. She has an amazing singing voice. She was on stage acting and singing and dancing and stuff like that. She dropped out of art school when she got pregnant with my older brother. It was a very different time, you know? 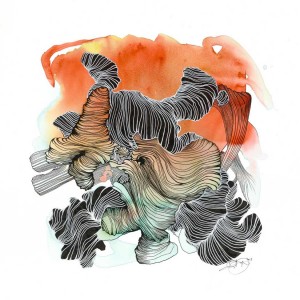 Very, very briefly. I can’t really call it art school; I just took art classes. I had offers for partial scholarships to both the art schools I was interested in. But my family had no money at the time. Even at 18 years old, I was making the decision: do I want to go into debt? Or do I want to see what this rock band thing’s going to do? To me it seemed like a big bite to take out, to take on forty, fifty thousand dollars in debt, even with a little help from the schools. So I chose the music direction. But I’ve stayed painting and drawing and writing and all the different modalities of creativity that I’ve always loved. There are periods of time throughout the day when you’re on tour where there’s just nothing happening. So many of the people I came up with in music would fill it with partying. And that’s one place that I never was really interested in. So I’ve spent a lot of my time while we’ve been touring continuing to hone other crafts. 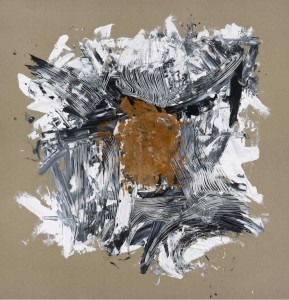 Now that you’re painting on such a large scale, are you ever resentful about tour taking you away from that kind of work?

No, no. In fact, the older I get, the more appreciative I get of the modality of music. Even though it’s been all consuming, it’s given me permission to be more of an artist. A lot of people maybe would feel trapped in the one thing that brought them good fortune or abundance. But I felt like it was more of the universe nodding to me, like, yes, this direction feels good. Keep exploring. I suppose I’ve never really been great at staying in my lane.

Does your headspace have to change, transitioning so often between life as an exhibiting artist and as a front person?

Not necessarily. In fact, there’s less pressure with painting. Making music is beautiful and fun and intellectually challenging, creatively challenging. But there’s so much more of an expectation on it at this point. We’ve been a band for almost 30 years. One of the things that comes with it is a knowledge that many, many ears and eyes are going to be on what we do. With painting, it’s a different animal. When I’m done with a painting and I feel comfortable enough sharing it, once I’ve made that decision, putting it on the wall and then standing there next to it feels like a walk in the park compared to walking on stage in front of thousands of people trying to sing pretty, you know? [laughs]

I’ve always appreciated how well Incubus has used its success to bring light to issues that are important to you. I assume you have access to certain opportunities as a painter that are thanks in part to your platform as a musician, like your collaboration with Hurley against single use plastics. Do you feel a similar ethical responsibility with artwork?

I think that the ethos around all of it is much the same, in that to have any kind of a public platform comes with the opportunity to move the needle, even a little bit. It would be an opportunity wasted if I merely collected the glory. “I painted a picture, I wrote a song!” It’s like, big fucking deal, you know? [laughs] It doesn’t have to be about just lights and sound or paint on canvas. There can be a little bit something more, or potentially even a lot more. There are times when I feel earth-shattering shifts because of a song, where I was moving in one direction and then I am no longer moving in that direction. I hope to continue to do things that steer people in certain directions. In this case, like, maybe don’t use as much plastic? Just think about it a little bit. Here’s a painting to remind you, or a poem to remind you. Thanks for noticing. 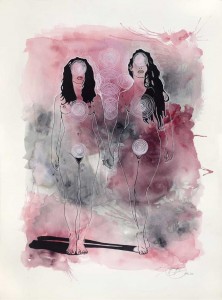 You and [guitarist] Mike [Einzinger] have publicly questioned your association with nü-metal, because you resented the misogyny in that genre. In your collaborations as a visual artist and as a curator, you’ve worked primarily alongside women. And as someone who works in this field and sees how infrequently women are represented in production, I’m psyched that you have a woman tour managing you. A lot of your portraiture also focuses on women as subjects. Is there a feminist perspective you bring to your work?

One of the things I always noticed about being on tour was that it was a boys club all the time. The longer we do it the more I realize, in the spaces that we occupy, we have the opportunity to create space. We have the opportunity to bring this tiny little economy everywhere that we go. And so why wouldn’t we want it to be more egalitarian and more balanced out and have more feminine perspectives and not just a sticky, black t-shirt-wearing perspective? [laughing] To me, things get more interesting when they’re more diverse, more multifaceted, more fun, healthier. I’ve always felt when there are purely sanitized or homogenized environments, shit gets boring really fast and stuff starts to get toxic really fast. So I love helping to create and curate environments that have multiple perspectives. 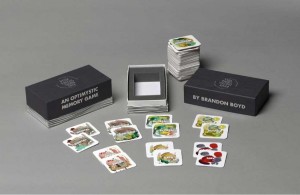 Your card game Deux Portes was inspired by Brian Eno’s Oblique Strategies. Are there strategies that have been helpful to you when you’ve had a hard time returning to your practice?

I have learned how to, at times, surrender to the process, because there are times when the process comes to a screeching halt. There’s nothing you can do about it. We might have a deadline or we might have high-minded ideals chasing us down. Sometimes, that’s just not going to happen that day. So I get up and go for a walk or go for a bike ride or jump in the ocean or do something that just changes course. Usually when you allow yourself to change course, there’s something waiting right around the next corner. Sometimes it’s good to beat it to death until it’s finished. But sometimes it’s good to know when to just [put your] hands up, walk away, and not take it personally. Weirdly, going back to where we started with meditation, even though I enter into it with no goal in mind — it’s a beautifully meaningless activity — I think it’s been helpful to me in learning how to not attach so dramatically to thoughts and ideas. So if there’s an idea that I love and I’m chasing it, if it switches course, I’m getting better at being like, all right! I’m just along for the ride. 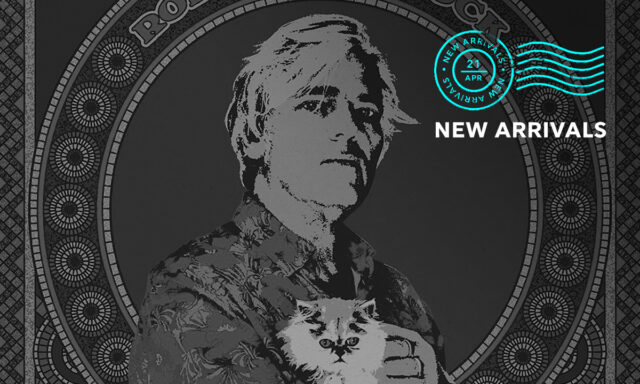 New Arrivals is the starting point for your New Music Friday.