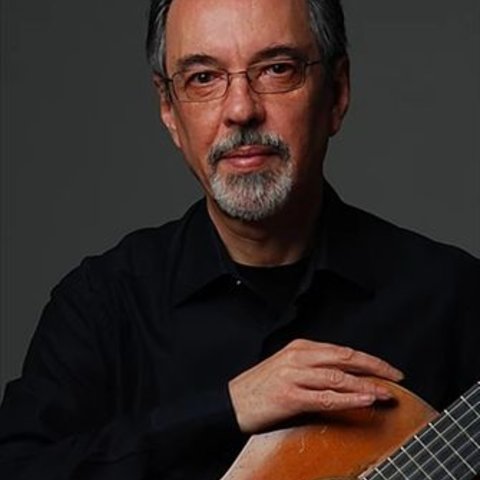 A longtime fixture of the Decca label's guitar catalog, guitarist Eduardo Fernández is one of South America's most renowned masters of his instrument. He is also a noted pedagogue and the author of an internationally successful guitar method.

Fernández was born on August 28, 1952, in La Paz, a suburb of Montevideo, Uruguay. He took up the guitar at age seven, studying with Raúl Sanchez, who had studied with Andrés Segovia. Fernández's style has sometimes been compared with Segovia's. When Fernández was 11, he and his brother, with whom he often played duets, gave their first public concert. Several times Fernández drifted away from the guitar, but each time he was drawn back. At 15, he stopped playing for a time but then took up music again, studying theory and counterpoint with composer Guido Santórsola and guitar, for four years, with composer Abel Carlevaro. These studies took place while Fernández was trying to complete a university degree in economics, but after winning a prize at the 1972 Porto Alegre Competition in Brazil, he devoted himself to music. He began to branch out beyond South America in 1975, entering the Radio France Guitar Competition and winning another prize there. In 1977, he played the first of many concerts in New York, under the auspices of the Center for Inter-American Relations. His London debut followed in 1983, and after that, his career was international in scope, including both solo recitals and concerto appearances.

Fernández's London recital earned such good reviews that he was signed to the Decca label on the strength of it, even though at the time, he was largely unknown. He released 18 albums on Decca and its associated labels, also issuing a recording of Rodrigo's Concierto de Aranjuez for BBC Music Magazine in 2005. His recordings have included South American and European music, the latter both inside and outside the Spanish tradition. His recorded repertory stretches from Bach to Luciano Berio. As of 2020, his most recent recording is one of André Previn's Guitar Concerto, with the Royal Philharmonic Orchestra conducted by the composer, released in 2016. Fernández's guitar textbook appeared in English as Technique, Mechanism, Learning in 2002, gaining an international distribution.