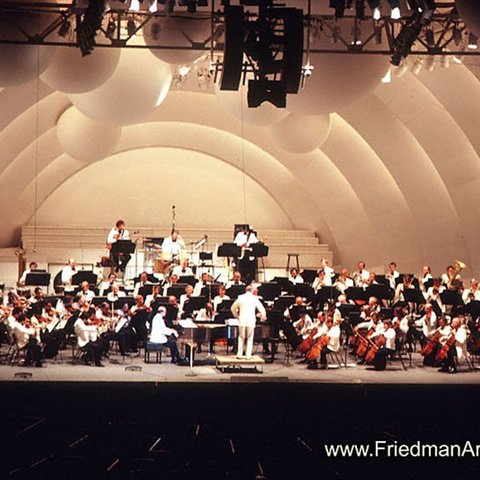 As a venue, the Hollywood Bowl can boast that it has hosted an astounding range of luminaries throughout its history. In tandem with the Los Angeles Philharmonic's perennial summer residency there, conductors ranging from Otto Klemperer to Leopold Stokowski (who actually founded the short-lived Hollywood Bowl Symphony in 1943) to Herbert von Karajan to Leonard Bernstein have stood upon its podium; Arturo Toscanini, it is said, is the only major conductor of his time not to have led a concert on its stage. Performers from outside the realm of classical music — including Al Jolson, Frank Sinatra, Simon and Garfunkel, and Mikhail Baryshnikov — have also lent a special cachet to the legendary Bowl. Australian/American composer Percy Grainger was married on its stage in 1928.

Though the Hollywood Bowl's association with the Los Angeles Philharmonic dates to 1922, the Bowl's own resident orchestra — the Hollywood Bowl Orchestra — only came into being in 1991. Since then, under music director John Mauceri, the ensemble has distinguished itself for its spirited, always crowd-pleasing performances. Generally avoiding the weightier staples of the orchestral repertory, the Hollywood Bowl Orchestra has gained much favorable attention for its performances of film and Broadway music, light classics, and other "pops" favorites. Among the ensemble's recordings are well-received interpretations of the music of George Gershwin, Irving Berlin, and Duke Ellington. The ensemble has made several tours to Japan and a successful 1996 trip to Brazil. In the late 1990s, it began presenting live orchestral accompaniment to films clips projected on the Bowl's big screen. Mauceri and the orchestra have also made it a mission to restore classic film scores.

J. Strauss II: You and You (from Die Fledermaus) (1995 Digital Remaster)

The Waves Of The Danube (1995 Digital Remaster)

Tchaikovsky: Dance Of The Sugar-Plum Fairy (Act II - No. 14c)

An American in Paris