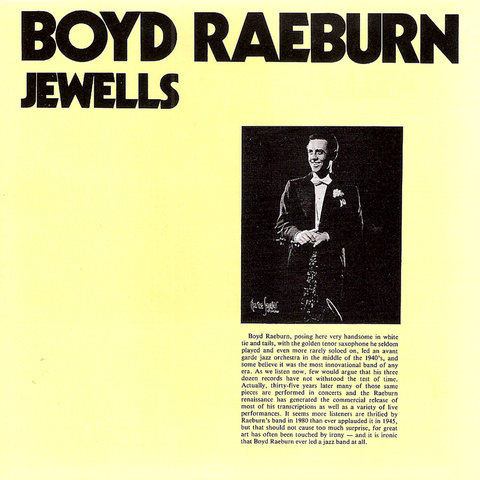 Boyd Raeburn was never much of a soloist, but his short-lived big bands in the mid-'40s featured some of the most advanced arrangements of the time, particularly those of George Handy. Raeburn actually started out leading commercial orchestras in the 1930s, and it was not until 1944 that his music became relevant to jazz. That year, he had a forward-looking swing band that included at various times such players as Benny Harris, the Johnny Hodges-influenced Johnny Bothwell, Serge Chaloff, Roy Eldridge, Trummy Young, and Handy on piano, playing arrangements from George Williams, Eddie Finckel, and Handy. The group overall was influenced by Count Basie, but they were also the first to record Dizzy Gillespie's "Night in Tunisia"; Dizzy even guested with the band. By 1945, Raeburn's music became much more radical with George Handy's charts (which were sometimes influenced by modern classical music) dominating the repertoire. Vocalists David Allyn and Ginnie Powell (Raeburn's wife) cheerfully sang while all types of dissonant events occurred behind them. Even though it was a constant struggle to keep the orchestra together, Raeburn's band actually grew in size during 1946, with reed players doubling on woodwinds and the addition of French horns and a harp. Such players as Lucky Thompson, Dodo Marmarosa, Ray Linn, and Buddy DeFranco were among the many who passed through the band. Johnny Richards was the key arranger in 1947, but by the end of the year the band was no longer recording and Raeburn soon went back to performing dance music. His pleasant Columbia records of 1956-1957 are of little interest, but Boyd Raeburn's earlier bands are represented on sessions for Musicraft and Savoy, radio transcriptions put out by Circle, and broadcasts released by IAJRC and Hep. ~ Scott Yanow

A Night in Tunisia

March of the Boyds

March Of The Boyds

March Of The Boyd's