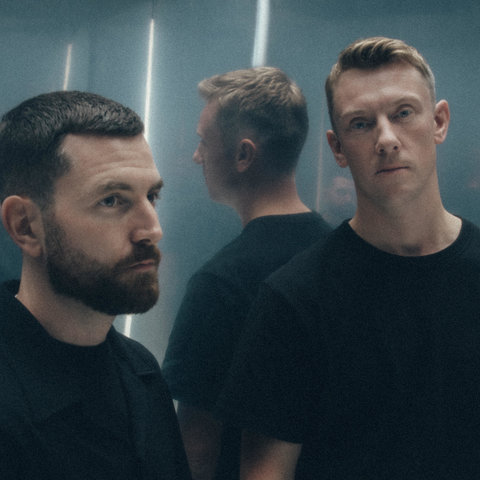 Belfast-born/London-based duo Bicep (Matt McBriar and Andy Ferguson) are childhood friends who bonded over a shared love of dance music. In the decades since first meeting, aged 8, Bicep have become one of the world’s most avidly appreciated curators and producers of electronic music.

Comfortably installed as one of the biggest names in both underground and mainstream dance music, Bicep recently announced their hotly anticipated second album, “Isles”, coming in January 2021.

Born and raised in Belfast, the pair’s home listening ran the gamut from Slayer and Tangerine Dream to Irish legends Thin Lizzy, Rory Gallagher and Moya Brennan. Both, however, cut their musical teeth in their hometown’s thriving club scene, centred around legendary Belfast venue Shine.

“Going to Shine was like being smacked in the head with a hammer” says Matt. “It was either very intense, in-your-face italo tinged electro or really aggressive techno. Anything that sounded moderate was back bar music. The main rooms were always harder”.

“If it wasn’t energetic, it was boring” says Andy, of the music that predominated at the time. “Especially in the 90s, even the local radio there would be playing trance hits. It was way more ingrained in Belfast than in London”.

Shine became a breeding ground for the city’s DJs and producers, as well as a welcome respite from the divisions that predominated in Belfast at that time. “It’s a cliché” says Matt, “but dance music will have a big effect in such a place. I think that’s why it was, subconsciously, a bit more important there. No matter what, it gave people a chance to switch off, even just socially, to not feel it was us versus them”.

The duo parted ways after school, both leaving Belfast for further afield. Andy went to study Chemical Engineering in Manchester, while Matt studied design in Newcastle, but both took their love of dance music with them, regularly one-upping each other with deep cuts and lost classics they’d email back and forth. This habit grew to become FeelMyBicep, the blog they started in 2008 as a showcase for their favourite lost-but-not-yet-forgotten synth, house, funk and Italo disco rarities.

From those humble origins, FeelMyBicep became a vital online destination for dance music afficionados, regularly chalking up over 100,000 visitors a month. This spawned a club night, and record label, while its signature Bicep trefoil logo - designed by Matt himself - became one of the most iconic symbols in underground dance music. It wasn’t long before the pair graduated to being highly sought-after DJs, their sets reflecting the eclecticism of these online curations.

Initially playing individually as FeelMyBicep in Europe and Asia, they reunited in London and “have been making music every day since”. As producers, too, they soon found success. Following a releases on Throne of Blood, Will Saul soon snapped them up for a string of releases on his Aus Music imprint. Chief among these was the certified classic “Just EP”, whose dazzling title track became the undisputed club sound of 2015, earning both Mixmag and DJ Mag’s ‘Track of the Year’.

Bicep have collaborated repeatedly with compatriot Hammer, as well as with another groundbreaking UK duo, Simian Mobile Disco. They’ve also remixed for the likes of Blood Orange and 808 State, and been remixed by industry titans Steffi and Four Tet.

Signed to Ninja Tune in 2017, their self-titled debut album was released to universal acclaim later that year. “Bicep” attained a Top 20 entry in the UK charts, garnering plaudits from the likes of Pitchfork, Resident Advisor and the Guardian, as well as a cover feature in Mixmag to add to that magazine’s gong for “Album of the Year”. Tracks like ‘Opal’ — and the subsequent Four Tet remix— as well as he record’s lead single ‘Glue’, with and its iconic Joe Wilson-directed video, became touchpoints for electronic music in 2017, with the latter named DJ Mag “Track of the Year”. The ‘Glue’ video, alongside Bicep’s RA Live performance were also recently included in the lauded ‘Electronic’ exhibition, first shown at the Philharmonie de Paris last year and most recently at London’s Design Museum.

The pair cite moving to London, and the breadth of music this exposed them to, as key to their growth as musicians in this time, expanding their musical pallet with a world of new sounds, taken from every conceivable source. Both cite the joy of discovering Hindi vocals, Bulgarian choirs, or manically hitting Shazam in the hopes of identifying a Turkish pop song in a Dalston kebab house. London offered Bicep the sounds of Detroit, Delhi, Durban and Derby, all in one place.

“We embraced it” says Andy. “There’s so much choice. You just don’t get bored. When we arrived here, you could go to a different night every day of the week, that was the big selling point for us. The amount of excitement and hunger, the chance to experience new things, it was off the charts. So, we came and lived on the breadline for a few years, not even phased at all”.

These influences feed into their imminent second LP, “Isles”, a record they describe as being more moody and introspective than their debut. “The previous record was written from a very happy and almost naïve place” says Andy. “Our starting point was very different this time”.

Drawn from 150 demos, its ten tracks see the pair distilling their sound to its purest essence, from harder Belfast origins to the more global and contemplative influences they’ve picked up across the water.

The first track drawn from the record, ‘Atlas’, was released to massive acclaim in March 2020, making both the Radio 1 and Radio 6 playlists, and demonstrates this approach to the hilt; deep and euphoric, while also suffused with the roomy melancholy that resounds throughout their upcoming album. Produced when the pair were fresh off the back of their huge live tour in 2019, it was released at a time when its strains of bitter sweetness hit all the harder. It is, as Resident Advisor called it, “music that commiserates with you while you try to dance out your anxieties”.

“‘Atlas’ was our attempt at summing up some of the euphoric moments we experienced on that tour across those two years” they said at the time. “It feels like those moments are very far away for all of us right now, but we hope this serves as some form of distraction amidst all this chaos.”

The live experience has always been a primary focus for Bicep, who have toured the world over, curating and selling out an exhaustive list of Feel My Bicep parties (including Manchester’s Warehouse Project, NYC’s Knockdown Center and a 12- week residency at London’s XOYO).

After debuting a new live-show in 2017, the subsequent tour took them to revered festival stages at Glastonbury, Coachella, Sonar, Pitchfork Festival and Primavera, as well as sold-out headline shows across the UK, Europe, North America and beyond. Returning to London, they sold out a headline show at the legendary Roundhouse four months in advance, before a triumphant three-night sold-out run of shows at Printworks in London, the finale of which was recorded by Resident Advisor for their ‘RA Live’ series, with 1.3 million views to date on YouTube alone. Their two forthcoming Brixton Academy shows sold out almost immediately, amassing a ten thousand person waiting list once tickets were all gone.

In September 2020, with the live music & touring industry in a state of flux, Bicep announced a one-off ticketed livestream performance—one of the first of its kind for an electronic artist—broadcast across 5 different timezones, and watched by people in over 70 countries, with visuals by close BICEP LIVE visual collaborator Black Box Echo. Bicep’s booked events will now take place as and when venue schedules become more clear, with additional headline dates across the UK, EU and US hoped for in 2021, including a headline slot at Field Day in London, as well as Parklife, Roskilde, Creamfields, Primavera, MELT! And more.

The shows will present a fresh chapter for Bicep and are set to contain a wealth of new, previously unheard material as well as immersive new visuals from studio Degrau (previously The Royal Studio) and Zak Norman of Black Box Echo, who were the creative teams behind their previous album artwork and live show production. Please see below for up to date rescheduled tour dates.

In October 2020 Bicep will launch their ‘FeelMyBicep Radio’ show on Apple Music. The monthly shows will showcase the eclectic mix of genres that have influenced everything in the world of Bicep, giving listeners an insight into the music that has shaped their own productions, festival-headlining live shows and DJ Sets, to their renowned FeelMyBicep record label and podcast series.

Tears I Can Afford (Bicep Remix)