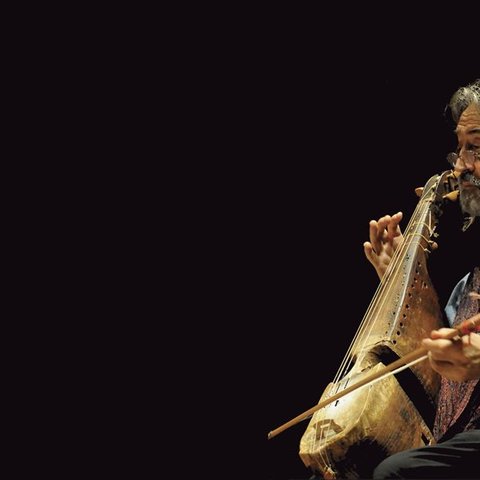 Among the most successful and influential musicians of the entire historical performance movement, viol player and ensemble director Jordi Savall has played a major role in popularizing early stringed instruments. Deep in their presentation of cultural context, Savall's recordings, often presented in lavishly illustrated and annotated editions, have covered ground beyond Europe and investigated the relationships between European traditions and those of the Middle East and Africa during the medieval, Renaissance, and Baroque eras.

Savall was born on August 1, 1941, in Igualada, in Spain's Catalonia region. His albums often include Catalan translations of their elaborate booklet notes. Savall began performing in a school choir and attended the Barcelona Conservatory of Music, graduating in 1965. After that, he developed an interest in the growing European early music movement and went on for further studies on the viola da gamba with Wieland Kuijken in Belgium and the gamba pioneer August Wenzinger at the Schola Cantorum Basiliensis in Basel, Switzerland. He succeeded Wenzinger as a professor at the Schola Cantorum Basiliensis for a time, and back in Barcelona, he performed with the early Catalan historical performance group Ars Musicae de Barcelona. In 1968, Savall married soprano Montserrat Figueras, beginning not only a marital but an artistic partnership that lasted until Figueras' death, and has continued with the couple's two children, Arianna and Ferran Savall.

Savall and Figueras co-founded the instrumental ensemble Hespèrion XX in 1974; the name referred to a region stretching from Italy to the end of the Iberian peninsula and suggested the broad sweep of Spanish influence in the music of the Renaissance and Baroque. The group soon became popular across Europe and in North America with its unusual sound, employing viols and a variety of early instruments such as the psaltery that were not included in other groups of the time. Its name was changed to Hespèrion XXI at the beginning of the 21st century. Savall also founded La Capella Reial de Catalunya in 1987, focusing the efforts of that group on early vocal-instrumental music, and in 1989 Le Concert des Nations, a flexible instrumental group whose repertory extended forward into the Romantic era. His popularity exploded beyond early music circles in 1991 when his viola da gamba playing was featured prominently on the soundtrack of the internationally successful film Tous les matins du monde.

Savall recorded variously for the EMI, Naïve, and Astrée labels as well others from the mid-1970s through the mid-1990s. He founded the Alia Vox label in 1996, releasing an album of music by Juan Cabanilles. The label attracted support from Catalonia's regional government and private sources, freeing Savall from financial constraints and spurring his creativity and experimentation into new realms. His releases have sold consistently well, reaching totals far beyond those of other early music groups. The Alia Vox albums sported elaborate booklet notes in as many as six languages (Savall himself speaks seven fluently), with hardback binding and beautifully reproduced illustrations. The booklets reflected Savall's programming philosophy, which generally included music illustrative of a broad cultural context. Increasingly since the year 2000, that context has included the relationship between Europe and its colonized lands, and Savall has released albums featuring music from non-Western traditions, often with the collaboration of musicians from those traditions. The 2017 album, Les Routes de l'Esclavage (The Routes of Slavery), was one of several releases to incorporate African music. Senior citizenhood has barely slowed Savall down, with most years seeing half a dozen releases from his three groups collectively. He has released well over 200 albums, including 2020's Concert des Nations performance of Beethoven's Symphony No. 1 in C major, Op. 21, and Symphony No. 5 in C minor, Op. 67.

Savall's unusually long list of awards includes a nod for himself and Figueras as Artists for Peace in 2008. In 2013, Savall was named a Chevalier of the Legion of Honor by the French government. In 2014, he refused Spain's National Music Prize, charging the Spanish government with "grave incompetence" in its support for Spanish music and musical artists.

The Messiah, HWV 56, Part I: Air "Ev’ry Valley Shall Be Exalted"

The Messiah, HWV 56, Part I: Air "But Who May Abide the Day of His Coming?

The Messiah, HWV 56, Part I: Chorus "And He Shall Purify"

The Messiah, HWV 56, Part I: Air & Chorus "O Thou That Tellest Good Tidings to Zion"

The Messiah, HWV 56, Part I: Recitative Accompagnato "For, Behold, Darkness Shall Cover the Earth"

The Messiah, HWV 56, Part I: Air "The People That Walked in Darkness"

The Messiah, HWV 56, Part I: Recitative "There Were Shepherds Abiding in the Field"

The Messiah, HWV 56, Part I: Recitative Accompagnato "And, lo, The Angel of the Lord Came Upon Them"