Along with the Invisibl Skratch Piklz and the X-Ecutioners, the Beat Junkies were one of the seminal DJ crews that revived the art of turntablism (i.e., using turntables as musical instruments in and of themselves) during the '90s. Distinguished by their multicultural membership and trademark Green Lantern rings, the Beat Junkies were formed in Orange County (outside Los Angeles) in 1992 by J-Rocc (born Jason Jackson). Fellow core DJs Rhettmatic (born Nazareth Nizra) and Melo-D (born David Mendoza) were joined by charter members Curse, Icy Ice, Symphony, and DJ What?!. Other crew members came onboard within the next year, including core DJ Babu (born Chris Oroc) and two future members of the Invisibl Skratch Piklz, Shortkut and D-Styles, plus Havikk and Tommy Gun. Mr. Choc completed the crew upon his arrival in 1995. That year, the Beat Junkies got their own radio show in the suburb of Santa Ana, and began testing their skill regularly on the DJ battle circuit around southern California. The core quartet of J-Rocc, Babu, Rhettmatic, and Melo-D all won individual titles at various levels of competition, and as a team, the Beat Junkies won the ITF (International Turntable Federation) world team championships in both 1997 and 1998, after which they collectively retired from competition.

Also in 1997, the Beat Junkies released their first widely available (i.e., non-mixtape) album, The World Famous Beat Junkies, Vol. 1, on PR Records. It was followed by further volumes on Blackberry in 1998 and 1999, with the former including their ITF championship-winning routine from that year. J-Rocc and Babu teamed up to form the Bumrush Bros., who appeared on the 1999 Rawkus compilation Soundbombing, Vol. 2, and also opened the Fat Beats record shop in Los Angeles, which later spawned an acclaimed compilation series of its own. Babu became the third member of the L.A. underground rap crew Dilated Peoples, serving as DJ on their acclaimed albums The Platform and Expansion Team; meanwhile, Rhettmatic landed a similar post in the Visionaries, and Melo-D served as the in-house DJ for Vibe magazine's late-night television spin-off. Several crew members past and present also worked in radio or other aspects of the industry. In 2001, J-Rocc launched the group's own Beat Junkie Sound label with Classic Material, a collection of Beat Junkie-related items spanning 1995-2000. ~ Steve Huey 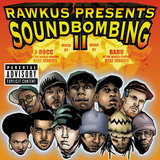