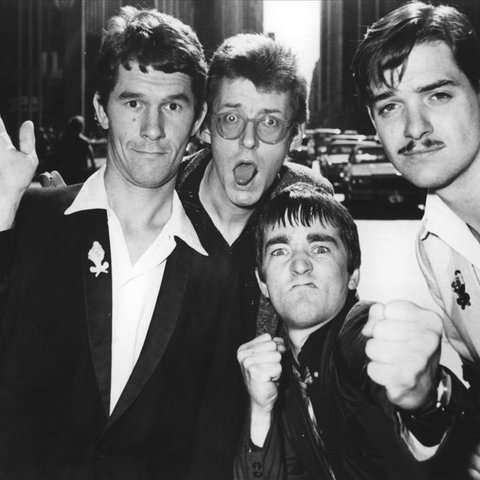 The English violinist, singer/songwriter, and actor — not to be confused with the U.S. R&B artist Bobby V who briefly used the same name — is most well-known for performing on the Bluebells' 1984 single "Young at Heart." In 1975 he joined the Fabulous Poodles — a pub rock take on the Bonzo Dog Doo Dah Band — before a stint in the south-east London country act, the Electric Bluebirds. In the '80s, he established himself as a violin-for-hire, performing and recording with acts as famous and diverse as Tom Petty, the Style Council, Mike Oldfield, and Kirsty MacColl. Valentino also made many recordings specifically for use in TV advertisements, and in 1984 began a sustained spell in the Hank Wangford Band. Between 1991 and 2011, he released four solo albums of vintage-styled country and light jazz, each named after the dialogue from the 1947 film starring Bing Crosby and Bob Hope, Road to Rio.

Born Robert James Beckingham in Chatham, Kent in 1954, he is the brother of Anne Dudley, an original member of the Art of Noise who enjoyed a career in orchestral arrangement and composition. He started using the stage name Bobby Valentino when he joined the Fabulous Poodles. Their debut album was produced by John Entwistle of the Who, and two more LPs followed from the Tony de Meur-fronted act before they bowed out with a 1979 U.S. tour and a final single.

The Electric Bluebirds grew organically out of a Sunday afternoon acoustic residency at a Deptford pub close to Valentino's home. It proved a useful stepping stone to the eclectic world of session musicians. Within a few years he went from being on-stage at the Hammersmith Odeon with Tom Petty to being on T.V. with the new wave act Haysi Fantayzee performing their 1983 U.K. Top 20 hit "Shiny Shiny." Valentino's regular gig for the rest of the '80s was performing alongside B.J. Cole in the Hank Wangford Band. His debut solo album, You're in the Groove, Jackson, appeared in 1991 and displays his characteristic deep and assured vocal tone. In 1993, following its appearance on a T.V. advertisement, "Young at Heart" was reissued. It spent four weeks at number one in the U.K., becoming the best-selling single of the year. After 1996's You're Telling Me and 2001's This Is Murder, Valentino formed Los Pistoleros with B.J. Cole for which he sang lead vocals.

In 2002, he won the right to be recognized as the co-writer of "Young at Heart," after playing its distinctive violin part in court to illustrate his key contribution to the track. Further legal action ensued in 2008, leading the Mississippi R&B artist to shorten his moniker to Bobby V, before Valentino issued a fourth solo album in 2011. Later years found him playing in Swill & the Swaggerband, a side project of Phil Odgers from the Men They Couldn't Hang, another act with a catalog in which Valentino had made regular appearances. ~ James Wilkinson

Best Of Both Worlds

Best Of Both Worlds

How Deep Is the Ocean

Wade Into The Water