Known almost exclusively for one of the longest-running Broadway musicals of all time, the rock opera Rent, Jonathan Larson was a composer, lyricist, playwright, and actor with a rousing, emotive songwriting style. Rent, his 1996 adaptation of the book Scènes de la Vie de Bohème and Puccini's opera La Bohème, featured artist characters from multiple marginalized groups as they negotiated life in Manhattan's East Village of the early '90s. On the morning of Rent's first off-Broadway preview in January 1996, Larson died of an undiagnosed heart problem. The show went on to open on Broadway that April and ran for over 12 years, winning the Pulitzer Prize for Drama and four Tonys, including Best Musical, along the way. A second Larson musical, Tick, Tick...BOOM!, was produced posthumously, premiering off-Broadway in 2001, but it remains a footnote in Rent's legacy. A 2005 film adaptation of Rent made show highlight "Seasons of Love" a Top 40 hit. Four years after Broadway's original production of Rent eventually closed in 2008, it was revived off-Broadway. In 2018, a Broadway special event titled The Jonathan Larson Project collected mostly previously unheard songs by Larson, and a cast recording followed in 2019. Established in memoriam of Larson shortly after his death, the Jonathan Larson Grants continue to award unrestricted cash gifts to emerging musical theater writers.

Jonathan Larson was born on February 4, 1960, in Mount Vernon, New York, and grew up in White Plains, where he studied piano and music theory. He studied acting and began writing musicals at Adelphi University, graduating with honors in 1982. His first professional musical was an adaptation of George Orwell's novel 1984, but he was unable to obtain the rights and instead created his own version of a dystopian future and called it Superbia. The show was never produced, but it did have a concert performance at the Village Gate nightclub in Greenwich Village in September 1989.

Larson next worked on an autobiographical musical called Tick, Tick...BOOM! Written as a one-man show, he performed it in New York in the early '90s. As he worked his way up in the New York theater community, he won the Richard Rodgers Production Award, the Richard Rodgers Development Grant, the Stephen Sondheim Award, and the Gilman & Gonzalez-Falla Theatre Foundation's Commendation Award. In addition to his own long-form musicals, he wrote only the music for J.P. Morgan Saves the Nation, songs for the children's television series Sesame Street, and music for children's book-cassettes such as An American Tail and Land Before Time. He also conceived, directed, and wrote songs for the children's video Away We Go! His musical Rent, loosely based on Henri Murger's Scènes de la Vie de Bohème (also the source of Puccini's opera La Bohème a century earlier) and set in the 1990s among HIV-positive artists living on New York's Lower East Side, was accepted for a production by the New York Theatre Workshop in 1992. After years of development, it began to gain attention when it went into rehearsals in December 1995.

Larson died suddenly at the age of 35 on January 25, 1996, of an undiagnosed aortic dissection later thought to have been caused by Marfan syndrome. Nevertheless, Rent began previews the following night and opened to rapturous reviews on February 13, 1996. Larson was posthumously awarded the Pulitzer Prize for Drama, and the production won Obie Awards for Outstanding Book, Music, and Lyrics as well as the Outer Critics Circle Award for Best Musical. Rent transferred to Broadway, opening at the Nederlander Theatre on April 29, 1996. It won six Drama Desk Awards, including Outstanding Musical, Outstanding Book of a Musical, Outstanding Music, and Outstanding Lyrics; the New York Drama Critics Circle Award for Best Musical; and four Tony Awards, including Best Musical, Best Book of a Musical, and Best Original Score of a Musical. The original Broadway cast album released by DreamWorks Records on August 27, 1996, reached the Top 20. The song "Seasons of Love" from the score became a popular standard recorded by Madeline Bell, Betty Buckley, Petula Clark, and Johnny Mathis, among others. Rent opened on London's West End on May 12, 1998.

In 2001, Larson's unproduced musical Tick, Tick...BOOM! was finally given a production off-Broadway, and RCA recorded it for an original cast album. Rent was adapted into a motion picture that opened in 2005. The soundtrack album reached the Top 40, as did its recording of "Seasons of Love," released as a single. Meanwhile, the Broadway production of Rent, having spawned national tours and international productions, continued to play year after year. In November 2007, PS Classics released Jonathan Sings Larson, an album of demo recordings by Larson of songs from Rent, Tick, Tick...BOOM!, and Superbia, plus other compositions. On January 15, 2008, it was announced that Rent would close on Broadway on June 1, 2008, after more than 12 years of continuous performances. At the time, that made it the seventh longest-running musical in Broadway history. Due to increased ticket demand, the show was later extended to September 7, 2008. An off-Broadway revival followed at Stage 1 of New World Stages in 2011 and ran for 13 months.

In 2018, The Jonathan Larson Project presented mostly previously unheard songs by Larson on Broadway for 12 performances. A cast album featuring Broadway alum such as Nick Blaemire, Lauren Marcus, and Krysta Rodriguez was released by Ghostlight in 2019. ~ William Ruhlmann & Marcy Donelson 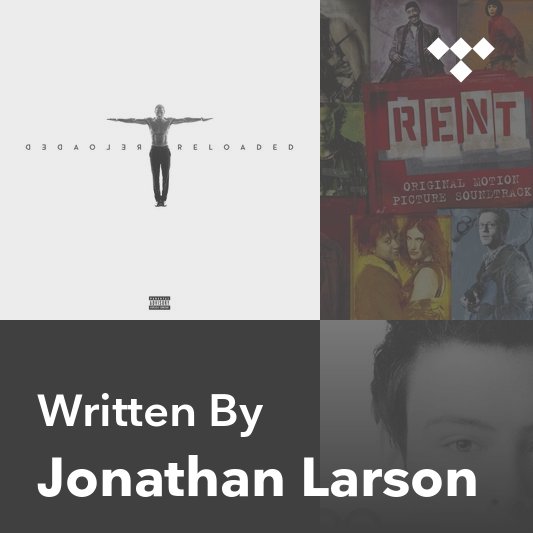 Take Me or Leave Me

Cast Of The Motion Picture Rent