Ian O'Brien's tech-house-jazz fusion put him on the map in 1996 as one of the most talented young dance producers, thanks to genre-bending singles for Ferox like "Intelligent Desert" and "Monkey Jazz." After his full-length Desert Scores dropped in February 1997, O'Brien began concentrating on more soulful, nu-disco output like a remix of Lisa Stansfield's "The Line" and his single for 4th Wave, "It's an Everyday World." His second LP, Gigantic Days, followed in 1999. ~ John Bush 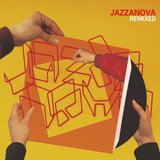